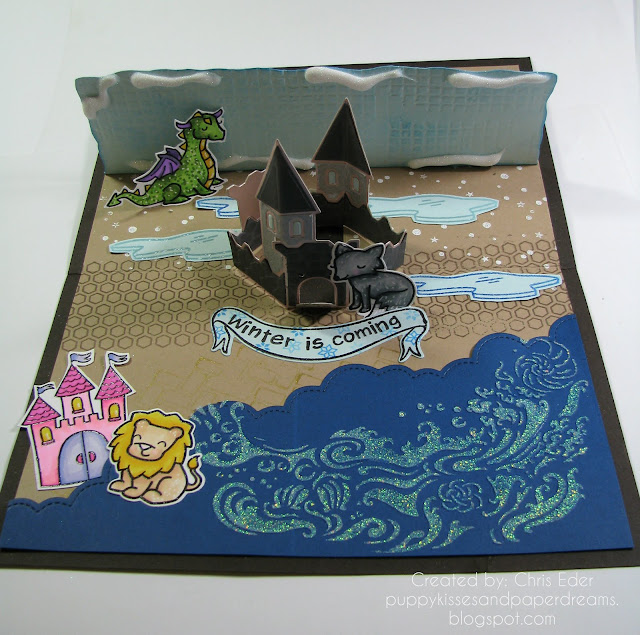 I started out by die cutting the Karen Burniston Castle Pop-Up die, using my Tonic Tangerine. I cut out all the parts of the castle from multiple papers and pieced it together following the directions. It can be sized for a standard A2 sized card, but I wanted a lot of space to add in more stuff, so I centered the castle in the middle of a full sheet of 8-1/2 x 11 cardstock that I had trimmed to 8 x 10-1/2. I also stamped out the Stark "wolf" using one of Lawn Fawn's foxes from the Critters in the Forest stamp set. I also stamped out the Lawn Fawn Bannerific banner and wrote "winter is coming" with Lawn Fawn's Harold's ABCs stamp set. I also created some ice bergs from Lawn Fawn's Critters in the Arctic. I stamped them out with Blue Bahama Memento ink, then overstamped with Versamark ink and then sprinkled on Ocean and Robins Egg embossing powders from Sparkle N Sprinkle, and heat set them. Then, I fussy cut them out. 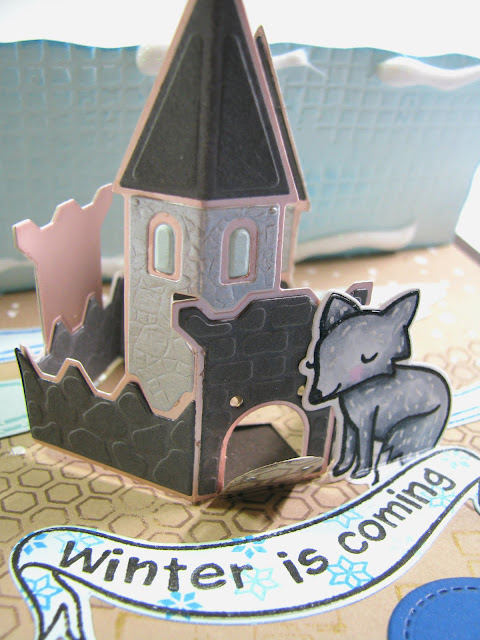 For King's Landing, I stamped out the castle from Lawn Fawn's Critters Ever After and fussy cut it. I also stamped out the Lion from Lawn Fawn's Critters on the Savanna. I also die cut some blue cardstock using Lawn Fawn's Puffy Cloud Borders die. This represents the water and ocean at King's Landing. After stamping the images with Memento Tuxedo Black ink, I colored them with Copic markers, and then placed them back in my Tonic Tim Holtz Stamp Platform and stamped them again with Versafine Black Onyx ink and then sprinkled on Sparkle N Sprinkle's Clear embossing powder and heat set it. This makes a nice solid black line that is embossed, after the coloring! 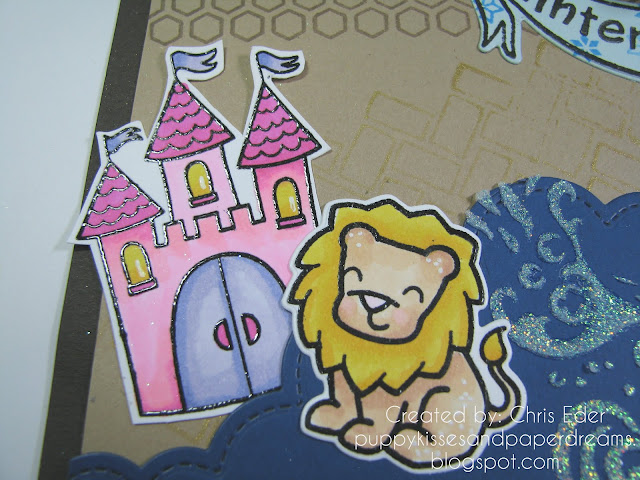 For the dragon to represent House Targaryen, I stamped out Lawn Fawn's Critters Ever After dragon, and colored him with copic markers, then reinserted him into the Stamp Platform and overstamped with Versafine Black Onyx ink and sprinkled on more Sparkle N Sprinkle Clear Detail embossing powder and heat set it. I also added some highlights with a white gel pen. I fussy cut out the dragon. I also created The Wall using blue cardstock. I dry embossed it with a textured embossing folder and then swiped some distress ink over the top and along the edges to give it some depth. Then, I squeezed on some Sparkle N Sprinkle Dimensional Glue along the wall, and covered the glue with Cloud Nine glitter. This gave the wall a lot of sparkle! I scored the bottom edge of the wall and folded it and adhered it to the card so that when the card is folded shut, the wall is flat inside the card. 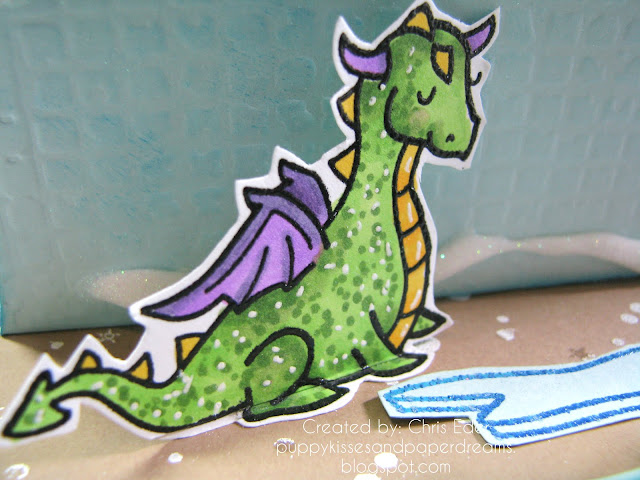 Here is another photo of the full card. See how The Wall stands up! Woot woot! And, Winterfell is in the center of the card. I also laid down a stencil, on the blue water part, and stenciled in Nuvo Moonstone Glimmer Paste to give the water a bit more flair. Before adhering everything down, I also stamped Lawn Fawn's "bricks" from their Interlocking Backdrops stamp set in gold ink for King's Landing. I also stamped out some honey comb texture using another stamp from Lawn Fawn's Interlocking Backdrops stamp set along the middle of the card to change up the terrain from warm and tropical King's Landing to Winterfell, which is dark and cold since winter is coming! 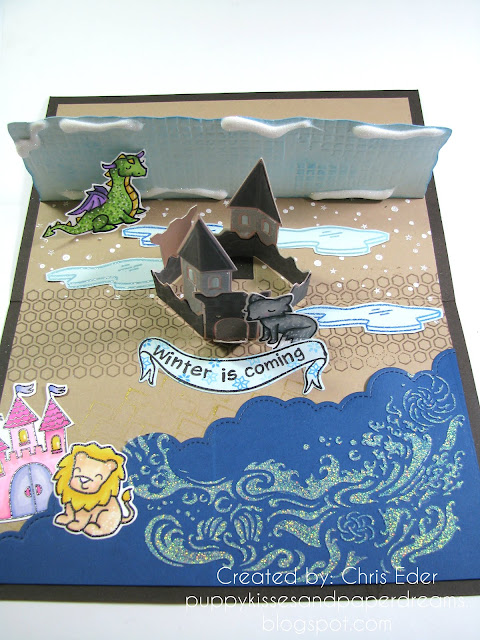 This was a really fun card to make! I, along with a billion other people, are counting down the days until the final season arrives. 11 more months ... but who is counting! hahaha. I hope this card gave you a little bit of a breather as we continue to wait!

Sparkle N Sprinkle compensated links are used when possible.
Posted by Puppy Kisses and Paper Dreams at 2:00 AM